I am writing this after reading three disturbing news in the media in the past two days.

The first news related to an attack by a species of beetles in my hometown, including the building where I am staying in now. The insect, called the blister beetle, or acid beetle, when it falls on a person’s skin, emits a toxin which causes severe burn injuries on it. The faces and other parts of the bodies of many people in my town were burned as a result of this insect. In my own building, this creature crept in through the windows and bit two children. My wife and I are on guard day and night against the presence of this evil insect in our apartment.

Here are the media reports:

Blister beetles are causing distress in Kakkanad area with close to 100 people developing blisters on face and other parts of the body. The number of panic-stricken patients seeking medical help after spotting the blisters has increased over the past few weeks.  The Hindu

The second news is about a rat plague in Australia.

Millions of rodents are running amok in parts of Australia’s eastern states, with residents sharing horror encounters on a daily basis…They’re all around the house. Every time you open a drawer, you’re potentially going to find one.  NBC News

The plague of mice attacking parts of Australia is turning into a horror story, with the rodents threatening to invade Sydney, reports of the vermin eating their own, and the farming industry being thrown into turmoil…People are actually just abandoning crops because they think ‘why am I going to plant this if it’s going to get eaten?’  Bloomberg 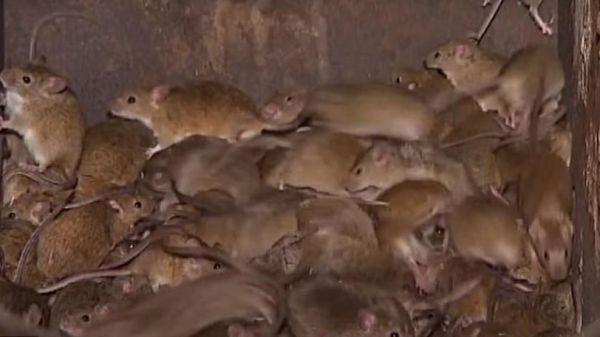 The third news, that I saw yesterday, came as a reply to a comment I made on a YouTube channel. This is a portion of what the responder wrote to me:

There are now flies swarming in the DC area. This morning when I awoke, I had maybe 300 flies in my kitchen and there is no explanation for that.

Fly invasion has happened in other places too. This news is from San Francisco.

It is a constant fight against the flies. We are now unable to eat lunch in our showroom, since the flies find a way to crawl on our food or into the refrigerator even when covered or closed.  Bloomberg

And attacks by foxes and coyotes.

After tucking their nine-month-old twin girls into bed, two parents and their four-year-old son watch television downstairs in their suburban row house in Britain. As they unwind, a fox fearlessly sneaks through an open door and into the twins’ bedroom…As the parents flip on the bedroom light, they are shocked to find a fox viciously attacking one of the babies.  BBC

In the last two decades, thousands of the carnivores have migrated to metropolitan areas in search of food. Experts maintain there could be several thousand coyotes living in New York, with a similar number in cities such as Washington, Los Angeles and Chicago…In the past nine days, two young girls playing outside their homes were attacked [by coyotoes] in separate episodes, officials said. Both girls survived with minor injuries…The police have advised parents not to let small children roam farther than an arm’s length away, and to keep them indoors at night. People walking their dogs at night carry large sticks alongside their leashes.  The New York Times

I have also read reports of mass invasion by scorpions, phytons, and vampire bats.

Yellow scorpions are invading Brazilian cities…Just about every shop and home in the nearby vicinity has seen one recently. At night, the predatory arthropods lurk at the entrance of supermarkets, crawl up kitchen sinks, and skitter into second-story bedrooms…The stings can cause seizures, vomiting, and excruciating pain.  Bloomberg

Bounty hunters and biologists wade deep into the Everglades to wrestle with the invasion of giant pythons threatening the state’s wetlands…Scientists say that the snakes are responsible for a recent 90 to 99 percent drop in the small mammal population in the national park.  Smithsonian Magazine

Peru’s health ministry has sent emergency teams to a remote Amazon region to battle an outbreak of rabies spread by vampire bats…3,500 people had been bitten by the bloodsucking bats.  BBC

BBC has reported about ten animal invasions of our present times “that look like biblical plagues…From locust swarms 110 miles long to armies of giant snails, these plagues are what happens when a species runs rampant”. The ten invasions are by algal blooms in the sea, mosquitoes, mayflies, locusts, armyworms, queleas (small, finch-like birds), giant African land snails, jellyfish, ants, and mice.

I expect almost all kinds of wild animals to be part of this endtime plague that is coming upon every nation, including the ones you commonly see around your house – raccoons, skunks, squirrels, moles, crows, and more.

One of the most horrifying aspects of The Great Tribulation that is coming upon the whole world, is attacks on humans by ‘wild beasts’. This prophecy is given in two books in the Bible:

I will let loose the [wild] animals of the field among you, which will bereave you of your children and destroy your livestock and make you so few in number that your roads will lie deserted and desolate.  Lev 26:22 AMP

So I looked, and behold, an ashen (pale greenish gray) horse [like a corpse, representing death and pestilence]; and its rider’s name was Death; and Hades (the realm of the dead) was following with him. They were given authority and power over a fourth part of the earth, to kill with the sword and with famine and with plague (pestilence, disease) and by the wild beasts of the earth.  Rev 6:8

The Greek word for ‘wild beasts’ means not only mammals and reptiles, but also birds, insects, fish, and even microscopic creatures.

I am writing this message to urge you to keep watch on this aspect of the endtime events. There are many other events you should watch, and I will be writing about them all in this site. Protection from attack by crazed animals should be part of your fervent prayers for your present family and the future families of your children and grandchildren who may go witness the endtime events.

You can escape this aspect of The Great Tribulation, as well as all other coming evils of the endtimes by heeding the words of your Protector.

But take heed to yourselves, lest your hearts be weighed down with carousing, drunkenness, and cares of this life, and that Day come on you unexpectedly. For it will come as a snare on all those who dwell on the face of the whole earth. Watch therefore, and pray always that you may be counted worthy to escape all these things that will come to pass, and to stand before the Son of Man.  Lk 21:34-36