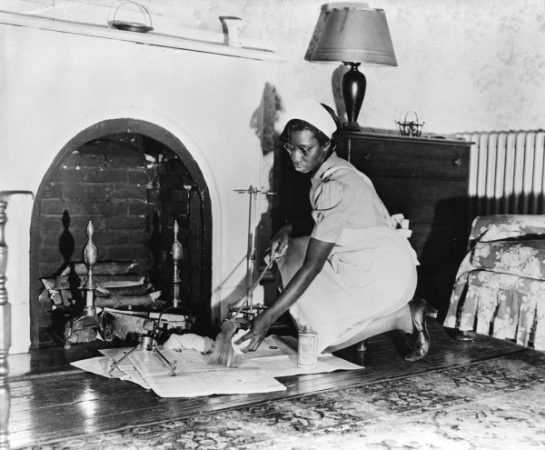 A Godly old woman I know had a constant problem. She had a maid who came daily in the morning and took care of all the cooking and other home chores. The old woman was fully satisfied with her maid in all aspects of her work, except in one area. Every day when the maid returned to her home, she took away with her a generous portion of the foodstuff she found in the aged woman’s house. Now the maid had all the freedom to eat as much as she liked where she worked. And the kindly old lady had never refused anything that the maid had asked her. So when such generous treatment was given to the maid, it became an unbearable thought that she should want to daily pilfer from her employer.

The good old woman began to lose sleep over this problem. Day by day, her thoughts about the maid’s behavior rankled her more and more. After a month or so, she became acutely obsessed with the maid’s behavior and not being able to do anything about it. Of course, she could dismiss the maid, but she didn’t want to do that. Once when I met her, she was in an especial state of dejection. For the maid had now taken away a good chunk of the special cookies the old woman had carefully kept in her biscuit box for visitors. The situation was getting out of hand, and the old woman was ever more agitated.

I told her, ‘Next time thoughts of her pilfering comes to your mind, bless God that you are able to provide her the pilfered food’.

She stared into my pupils. This was obviously an alien concept to her.

‘I will give her all the food she wants if she asks me, but I cannot tolerate her stealing food from me.’

‘Try that solution anyway’, I coaxed her. ‘When next time anger swells up in you at what she is doing to you, suppress that feeling and force yourself to thank God she has taken some food home.’

‘God has blessed you with abundance’, I continued, ‘so much that her pilfering doesn’t make you go hungry. And God is able to return twice as much as she pilfers from you. Enjoy her pilfering in the thought that you can afford to provide her what she wants even if that provision is by her own theft.’

The Godly old woman was confused but bemused at the novel solution I offered. She assured me she will give it a try.

While not many of us have to daily deal with a thief in our home, we encounter situations in our workplace that require a similar solution:  doing the opposite of what our natural inclinations urge us to do.

We realize a colleague has spoken ill of us behind our backs. Rebuke in your mind, or even aloud, the offended emotions that make you resent him and want to get even with him. Force the noxious thoughts to give way to deliberate thoughts of forgiveness, asking God to enable you to do so. Grab your reluctant mind by its scruff and force into it the words, ‘Lord, bless him who did that wrong to me!’ Yes, you have to exert mental and emotional violence against your kicking and struggling thoughts to crucify them and give birth to Godly thoughts. You see, the natural inclination to forgive any wrong done to us is anathema to our original human nature. Which is why Paul tells us to ‘take captive every thought to make it obedient to Christ’.  2 Cor 10:5 NIV

Or, say, a tedious person comes over to where you sit and not only wastes your precious work time but bores you to the core with his babblings. The natural response varies from person to person. Some smile and endure the pain reverberating from their tympanums. Some shoo him or her away at the first opportunity. But the common emotion driving all these responses is the same. It’s dislike, scorn, impatience, hate. Now the Godly solution is to put your precious work aside and take captive the thoughts of scorn and impatience and willfully release the thoughts of goodwill toward the person irking your aural senses.

Thomas, my fellow villager, is a unique character in every sense of the word. He has the capability to never discern even the clearest signs of unwelcome in the person he has managed to stall with his inquisitive words.

Once, very early in the morning, when the birds hadn’t yet tired of their morning chorus, came Thomas over to my place and leaned on the doorbell…until I forced myself to emerge out of my comfy blanket, and groggily headed to the door, thinking that only something of urgent import could announce itself so early in the morning and with such persevering tintinnabulation ringing sound.

On opening the door, it was a grinning Thomas. I gave him a piece of my natural mind, and went back to bed.

Over the next few months, I had to undergo further intensive training by the Holy Spirit in dealing with the natural mind. Less than a year later, Thomas, never known to give up a targeted victim, appeared at the door again at around the same time of the morning. This time the spiritual mind was ready, having knuckled the natural thoughts back into the abyss from which they came.

I smiled at seeing the horror. I mean, I really smiled from the heart. Then, opening the door wider, I greeted my tormentor warmly, and sat down to what I thought was going to be an unending hour with him.

Strangely, either because Thomas became uncomfortable with my strange response, or because of my own new mental disposition, the hour quickly came to end, and Thomas bid me good-bye.

I very seldom see him these days, and whenever I do, my natural feelings give way, without a struggle, to my positive thoughts, so that I really look forward to meeting him now. And Thomas himself seems a changed man. He just doesn’t seem such a boring person anymore – and this is the man from whom I had in the past literally hid myself behind a bush or ducked my head whenever I espied him a hundred meters away.

There is a natural man in us which Christ’s followers had renounced and crucified when they accepted Jesus as their Savior and Lord. But the natural man, which Paul calls the ‘old man’, is often capable of wrenching himself free and taking captive the feelings and thoughts of our ‘inward man’ for a short while. This was what Paul experienced often.

I find then a law, that evil is present with me, the one who wills to do good. For I delight in the law of God according to the inward man. But I see another law in my members, warring against the law of my mind, and bringing me into captivity to the law of sin which is in my members.   Rm 7:21-23

When we detect the natural man back in our minds, we must put on the spiritual man back with vigor, and we must deliberately and willfully do the opposite of what our old nature instigates us to do. We can oppose our natural man’s responses if we always appeal to our Savior to intervene and transform our attitudes.

‘O wretched man that I am! Who will deliver me from this body of death [from my natural man]?’ cries Paul. And he answers himself immediately:

It is God himself who will deliver us from our natural man. When, with God’s help, you force yourself to keep giving kind thoughts and kind acts, sooner or later they come back to you in the full measure you gave the offending person – plus some.

Give, and it shall be given unto you; good measure, pressed down, and shaken together, and running over, shall men give into your bosom. For with the same measure that you mete withal it shall be measured to you again.   Lk 6:38 KJV